Well Hello to you there!

Can you believe that we’ve just fallen into the beginning of June?

Do you ever get that feeling of ‘oh crap, what have I actually done this year?!’? Yep, me too!

I have to say its taken me a very long time to find the breathing space in my mind to actually sit and write to you since my last post. There’s been a hell of a lot going on both in my life and here in England right now and as such your brain space can get pretty cluttered.

I’ve tried to write this on 3 occasions, this picture about sums it up!: 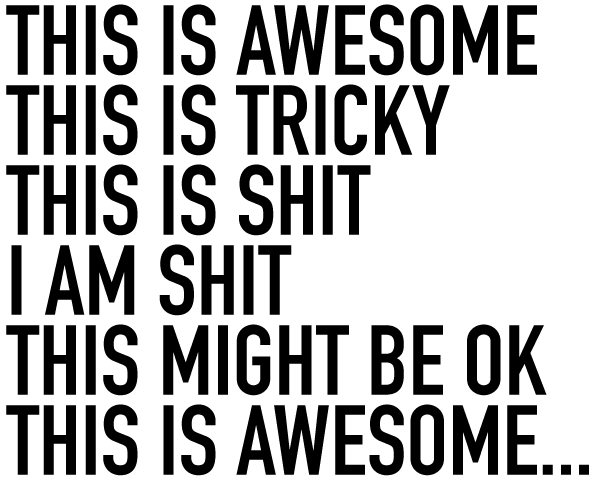 I’m sure anyone with a creative mind can totally relate!!

What’s changed for you since the last review?

For me I turned the grand old age of 27, went to see Bruno Mars at Sheffield Arena (WOW – What a performer!) and attended a Cousin’s Wedding in a village that remote it didn’t even have a SPAR or a CO-OP. It was an absolutely beautiful reception and I had a wonderful time, my cousin looked gorgeous and it was so so lovely to see my family who live all over England and in Spain, but as a life-long city dweller, it’s safe to say that I struggled without the option of a cash machine, a crafty Daim Bar from the local shop and a good 4G signal.

I’ve also been decorating this month, trying finally to get my damn front bedroom finished…I’ll post before and after’s once its complete so you can see the transformation- this stuff is hard on your own!

So what have I been losing myself in amongst all the madness? Well that would be MAESTRA by L.S Hilton. 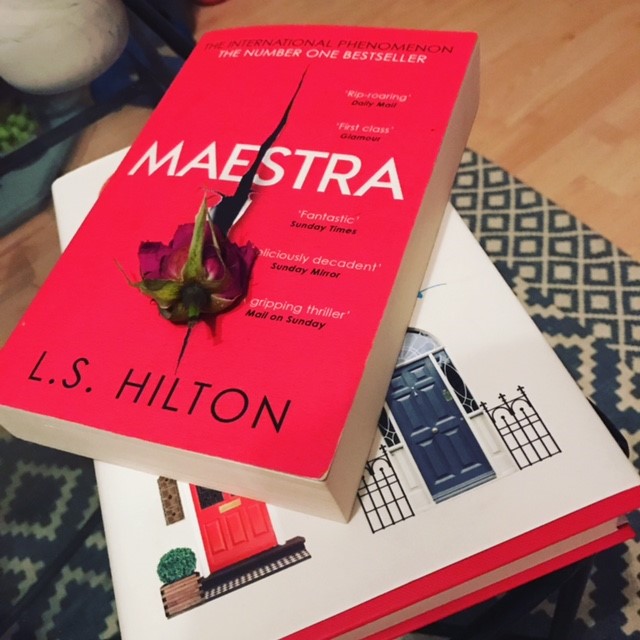 I picked the book originally due to it’s mysterious front cover and tantaslising (i.e. not giving much away!) blurb. All I knew was that this book sounded dangerous, so, naturally it grabbed my intrigue.

‘WHO IS THE MAESTRA? They started it, she’ll end it’.

Maestra, if you’ve not heard the word before is Italian for ‘Teacher’. So who is our teacher and who is the student?

I’ll warn you that this novel is explicit. So if 50 shades-esque is not your cup of tea, I advise against reading this blog post any further.

We begin with the epilogue, which sets the pace for pages to come. A character, of whom we’re not yet introduced, is in a high end sex and supper club. She details intricately her surroundings and what she can see; naked waitresses serving fine food, flutes of wine, lavish textures and clothing, and rich mysterious characters picking their play mate for the evening, for all to see. The words are honest, the player’s speech without guard.

I very much warmed to the fact that from the outset the nature and tone of the book is set out to you. It’s blunt, its rude, it’s uncharacteristic of a lot of novels to set the tone of things to come, to lay it so bare from the outset. As someone who thought that 50 Shades of Grey was pretty drab after Chapter 9, I liked the ‘POW’ of those opening words. I was actually a little stunned – my reaction was ‘woah, okay, let’s go!’ after finishing those 3 pages. She had me in her grasp and I wanted to know more. With this novel, you’re either on the ‘same page’ as the Author, or you’re not. Your imagination here is key, and how much you enjoy the book will depend on your openness, imagination and ability to go with the flow.

Chapter 1 follows and introduces us to our protagonist, she’s Judith, born and raised in Liverpool but desperately trying to leave her ‘less glamorous’ roots behind her. She comes across as shy, needy, an art-geek who is constantly in need of affirmation from her Art Auction boss Rupert (of which we all can read between the lines she isn’t going to get this). Because of her desire to fit in she both loves and hates her place of work, she doesn’t feel recognised for her ability and envies those who it all comes ‘too easy’ to.

I’m sure many of us can relate to this. Judith for me is a character you feel sympathy for, but one you also want to shake and say ‘you got this girl!’.

After a depressing day she runs into an old ‘friend’ from home, Leanne (AKA ‘Mercedes’), a brash and less demure woman who quickly introduces Judith to her line of work, which is a world away from Judith’s. Leanne works in a Champagne bar known as the Gstaad Club, where essentially, she is paid to look good and sit with men and drink. Judith, feeling the pennies pinching at her heels decides to interview for the club, and from here she works Thursday and Friday nights.

Personally I found this to be a very unrealistic move for the Judith that we know so far. What experience has led her to feel so open and free to this idea? Someone with so little confidence expanding into that line of work seemed very far fetched for me. Or, was it the lack of control in her own life which led her to want to work for a couple of hours in a place where she ran the show? Food for thought.

Fast forward and Judith is very good at her new ‘glamorous’ job, so good that she has landed a wealthy regular, ‘James’, a fat sweaty married old man with wads of cash who wants to take her away for the weekend.

Rupert (her boss at her day job) is also revealed to be less of a clean cut character, who we feel we should really dislike. After sending her on an assignment to which she is put into danger, it seems Rupert is all too aware of this risk. Finally, he sits her down for the conversation we’ve all been expecting… ‘I don’t think you really fit in around here, do you?’. A few choice words later and Judith is jobless.

Devastating this could be to her, her world, her love of art, her passion for her work, gone, meaningless, and the way in which the art houses work, her chance of securing another job after THAT blow out are pretty slim. So thank goodness she has another job and a back up plan with James to escape to.  Skip to the next chapter and both Leanne and Judith are off to Nice, bank rolled and alongside her rich regular James, of course.

I won’t lay any more of the story out for you, as I wouldn’t want to spoil the nature of the tale, as a lot of the appreciation and excitement for this thriller novel is in the not knowing what will happen with whom and where next, but what you can expect is lots of group sex, drugs, glitterati and violence. The once faithful and predictable Judith changes her life, she is both glamorous and dirty, and soon we begin to realise that she is without any doubt a manipulative sociopath. Judith will stop at nothing to get what she wants, and anybody who is not on her way with her, is IN the way.

Personally as mentioned previously, I felt that this wasn’t the Judith we knew. Whilst we learn of a difficult upbringing, I don’t feel that the character development really led us to believe that Judith would have these traits.. no mention of violence, bullying those more vulnerable to her or anything that would lead her to these ways. Anger can make a person do horrific things, however to this degree of manipulation would require more of a back story or history of psychological issues so far as I am concerned.

I am greatly interested in the psychology of our characters, ‘Confessions of a Sociopath’ by M E Thomas may also be of interest to you if your interested in the mind of manipulative human beings. It helped me to understand the level of manipulation, but also to see the red flags and elements missing in the author’s character’s history and actions.

I also felt that the character of Leanne was rushed, I was led to believe that she was significantly less intelligent than Judith and both are very different people. I would never understand how in reality that either would be friends.

The descriptions in the book however are beautifully detailed, I could take my mind right to where Judith was, the smells, sights, textures, to the temperature of the room. This was a book that really got to your senses, and I was racing through the pages as my mind wanted to know more. For a book that sets the scene pretty bluntly, you could worry that there was no real ‘climax’ to the book, but there is and there was.

I would strongly recommend reading Maestra if you’re a fan of Gone Girl and The Girl on the Train. Both have fairly similar themes and pace, and I enjoyed both tremendously as I did this novel.

If I was reviewing the book based upon detail alone, I would rate this 5/5, no other book has transported me to the scene quite so much as this, 5/5 for this Hilton! However, the lack of reality, poor situational flow and depth of character for me drops this quite significantly. I couldnt believe what Judith was supposed to be doing, I could imagine it but I didnt believe it, and a character for me has to be believable above all else. I also have no idea who is the Teacher and who is the Student.

The sequel ‘Domina’ is out now.

I loved the detail and pace of this book. The sex was blunt, it wasn’t glamorous, the descriptions of violence and thrill had my heart racing and I wanted to know if she would be caught. However the violence and sex were so random it didn’t flow, and Judith and Leanne were just not convincing enough for me, as a result I couldn’t believe in the story I was being told, and as such I wont be reading the sequel. I also have no idea what ‘Teacher’ has to do with this story. I dont agree that any additional character in our novel particularly taught Judith anything nor did she teach anybody, apparently she knew it all. 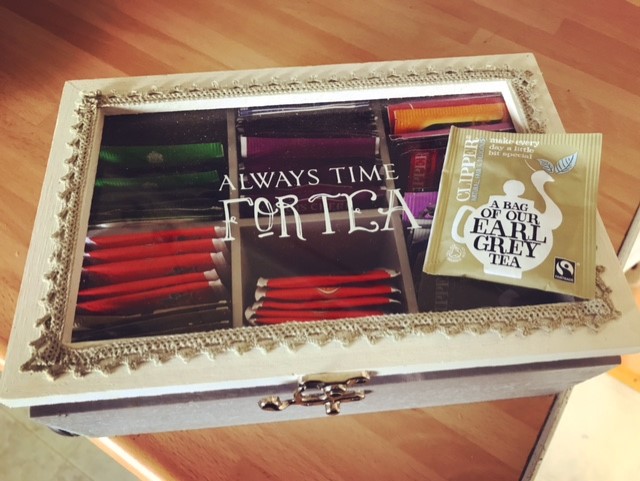 So the hotel I stayed at had their very own Tea Chest not too dissimilar from mine (much to my delight) and it was FILLED with Clipper tea! Obviously I therefore brought half of their box home with me…… ;). If you haven’t tried Clipper yet, I strongly suggest that you do. This Earl Grey is fragrant, punchy, strong and Fairtrade. Responsible, ethical tea at a fair price with a well rounded flavour. What more could you want!

I’m hoping that this month will be much quieter in terms of LIFE and I’ll therefore be able to focus on my loves, reading, writing and yoga. I’ll be posting on my Instagram the details of my latest book and post, so remember to follow both my blog AND my Insta to STAY TUNED!!!

FOLLOW ME AT Veryprettylittlethings   – FOR MORE UPDATES ON WHAT I’M READING AND WILL BE REVIEWING, MY BEAUTIFUL CITY AND MY LIFE!: