So it’s not often that I start a blog post at 9.40 at night, but I’m just so excited to be able to. My laptop has been out of action since Christmas; my last post was on a borrowed MacBook. So if you’re wondering where I’ve been, then picture me furiously hammering code into my laptop boot menu!

Unfortunately whilst being an adult has it’s pros (HELLO CAKE FOR BREAKFAST) it also means that I have to prioritise boring adult things like buying bathrooms over a laptop. Sigh…!!!

However today the computer gods seem to be on my side, and we’re temporarily back in business, so I’ll strike whilst the irons hot!

I may have been quiet owing to my computer problems, but I have still been reading and preparing my reviews for you, lovely readers.

It has admittedly been a quiet reading month or two, as I go on vacation shortly and so I have been spending most of my free time in the gym lifting weights, or in the hot yoga studio.  However I have managed to read one book to completion, and I’m interchanging 3 others, depending on my mood! I wanted to share my first review that’s been waiting for you a while,ready for the beginning of vacation season, so you can begin to compile your pool reading lists!

So whilst I’ve got a working web browser and a full battery, let me tell you about the book I finished in March…

THE FIRST FIFTEEN LIVES OF HARRY AUGUST, BY CLAIRE NORTH 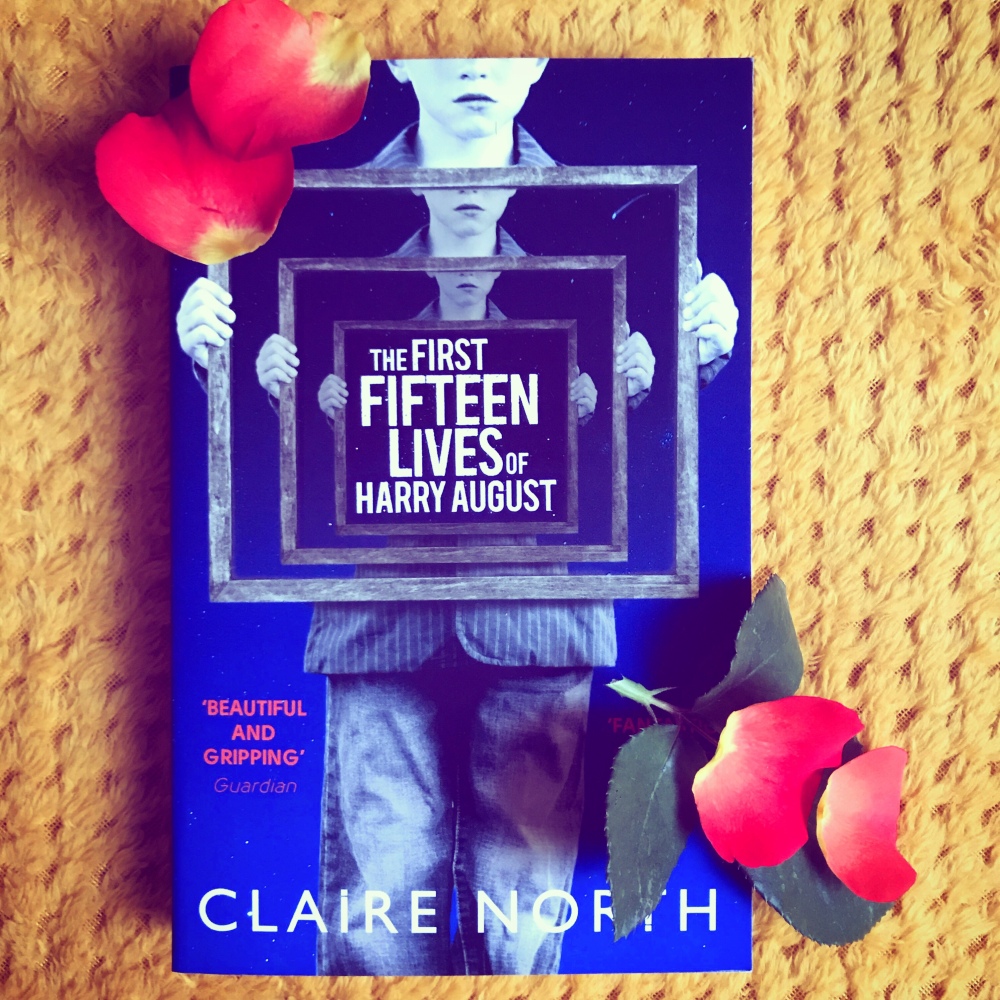 Recommended to me by one of my lovely readers,  I was so ecstatic to unwrap this beauty under the Christmas Tree on Christmas Morning. A lover of dual time concepts and a huge advocate of Matt Haig’s ‘How to Stop Time’, I genuinely could not wait to begin. Plus the book cover is blue. So, you know. Win.

Some stories cannot be told in just one lifetime.

The story follows a male protagonist (common in time themed stories by my experience so far, where the women at?!) by the name of Harry August, a man born to his House Maid Mother on 1st January 1919, at a train station somewhere near Berwick Upon Tweed in the North of England.

Sadly his young mother does not survive his birth, and from becoming an orphan in very humble beginnings, he is kindly adopted by another couple who treat him as their own.

The book begins by laying out themes of reincarnation, or as Harry puts it.. ‘living in circles’. My Boyfriend has his favourite lyric ‘Everything moves in circles’ tattooed on him, so I read this and smiled. Perhaps North also loves Incubus!

Harry is what is known as a Kalachakra/Ouroboran. By this, we mean that he lives his life and dies only to be reborn again. In his first life, he dies in 1989. The book follows Harry’s fifteen lives, through his trials and tribulations, but predominately it revolves around his membership and involvement in the Cronus Club, an international secret society; for Harry is not the only one with this gift. Or is it a curse?

Harry is also a mnemonic, a rare trait that means he can remember his previous lives. He uses his lives and his previous life knowledge to become a professional in many areas including a Doctor, Criminal and Professor. He also becomes an inmate in a Mental Health Facility. More than Once. In Harry’s 11th life, he is found by a 6 year old girl who bravely tells him…

The world is ending and we cannot prevent it. So now it’s up to you.

And so it becomes Harry’s purpose amongst his lives to save the Cronus Club, and the world, from a fellow Kalachakra with a dark agenda who uses his knowledge of future historical events and technologies to his advantage….

The book treads water amongst many different genres. It’s a sci fi novel, it explores history and spying, it’s a fantasy novel, its one that explores time travel, multiple time concepts and reincarnation.

My thoughts on this novel overall is that it was very repetitive. I mean as you’ll know from my other posts, I obviously love any book that makes you think, but FIFTEEN stories within one novel that begin in the same vein are a little boring. I loved the concept to begin with, but after around 1/3 of the book I realised that the same idea was being repeated. I liked the story telling tone, however found that the character of Harry had no real personality of his own. Some lives he was daring, strong and resilient, other times he had the personality of wet mop. I found the lack of character consistency a little underwhelming.  He also did nothing to support the younger members of the Cronus Club, which I thought was the point of being a member. I also didnt understand why he was the only one that could save the world.

In saying this, its still a very clever book. Claire North has clearly researched history, and thought deeply about how someone could use time travel to their advantage for both good and bad. It’s an interesting concept, and won the John W. Campbell Best science fiction award for good reason.  It raises a lot of questions, and I liked the way that the story intertwines.

But although I hoped I’d found my new favourite time concept theme book, I’m afraid this came up short. I love science, but the sci-fi element was a little too overly heavy for me and I found the use of made up words a bit confusing and unnecessary. I feel that if you’re going to make up words then you have to be very clever with it to engage the reader and make sure they remember them. Think J K Rowling and Diagon alley. It’s the word diagonally. Or the rememberall, you remember all. Easy.

I felt that a lot of the characters were irrelevant, character development of all but his nemesis lacked depth in my opinion. I have to say the ending was really intelligent. I just don’t see why it took 15 lives!!!

I’m sorry to say this but I was expecting great things, the book started off so well but I felt like it didn’t really develop to it’s full potential. It seems in the book community that this is a bit of a ‘marmite book’, you either love it or hate it.

I’d recommend it if youre interested in sci-fi, but if it’s a choice between Claire North & Matt Haig? Matt Haig every time.

You can Buy The First Fifteen Lives of Harry August at Amazon for £6.29 in the UK. Click Below to be taken direct to the Amazon store*

As an Amazon Affiliate I may benefit should you purchase, at no cost to you.

If you had to live your life over and over, how would you live it? It sounds like the perfect opportunity to learn everything and live each life to the fullest, risk taking, knowing that when you die you will wake again. But what about those that lived through difficult childhoods, illnesses. Is this story about bad karma? This links to a lot of buddhist teachings about reincarnation. I was lucky enough to be involved in a Buddhist meditation group a few years ago where we were taught Buddhist principles and mediation by Buddhist Monks. I’d be very interested to hear their take on this.

Personally I’d be calmer. I’d be less dramatic as a teenager, less stressed and more forgiving. I’d tell my younger self not to take things to heart, to stand up for myself, to take opportunities I was too scared to take, to move away when I felt the urge, and I’d probably start my own business. It’s something I’ve always wanted to do, but being so obsessed with financial security, I’ve never taken the plunge.

So I guess we don’t need more lives to tell ourselves these things, we just need perspective.

I’m interested to hear your thoughts – so please leave them below! 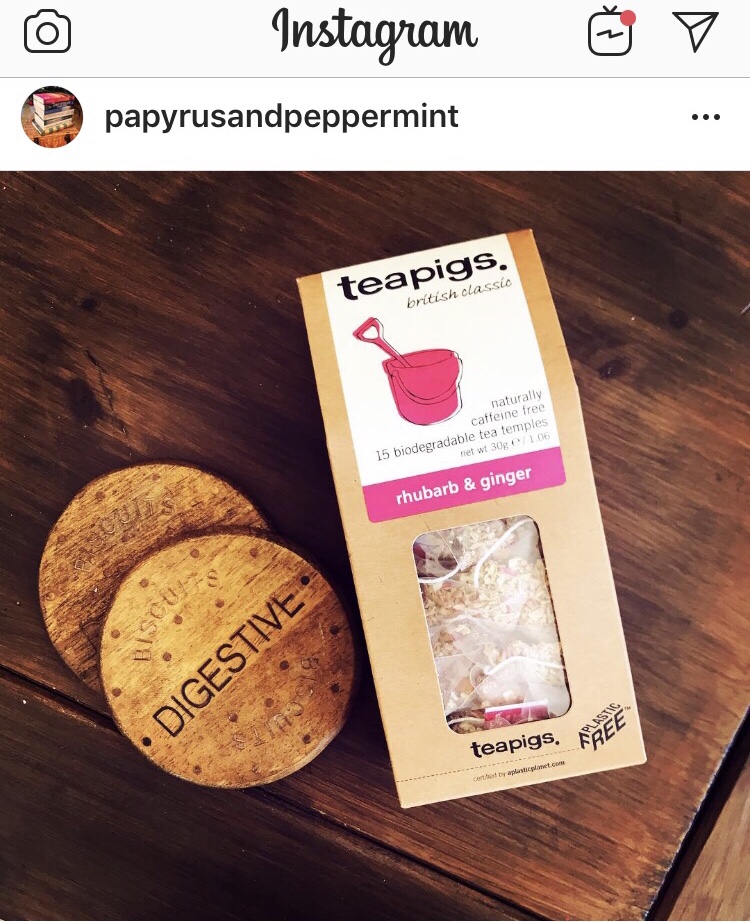 As promised in my last post, I went on the hunt for a new tea to drink alongside our favourite reads. This month, I’ve been drinking TEAPIGS Rhubarb & Ginger Tea, absolutely perfect for the spring season. It’s like drinking summer with the warmth of winter from the ginger, and perfect for any spring colds.

Available in all good supermarkets!

Until the next Chapter,