So I’ve been on furlough at work for a whole week today and I can honestly say I feel like I’m in retirement, but without the fun trips to the coast, the endless biscuits or a complete commitment to a tv schedule…although a certain tv quiz show at 5pm weekdays now has a special place in my day.

I have been walking, reading, cooking healthy and nutritious meals and exercising as much as I can at home. As promised, I am blogging as much as my downtime brain will allow, so that you can choose some new reads to have delivered, or electronically download to see you through and keep your mind active, entertained and creative.

The next book I can’t wait to share with you is one that has been likened to The Handmaid’s tale by many readers, although apparently the author was inspired by The Stepford Wives. I can’t say I’ve actually read either book (although I’ve just got a copy of The Handmaid’s tale), but regardless – this book seems to have split opinions across the book community. However with a tantalisingly eye-catching cover and a suspense filled blurb, I couldn’t wait to get stuck in. 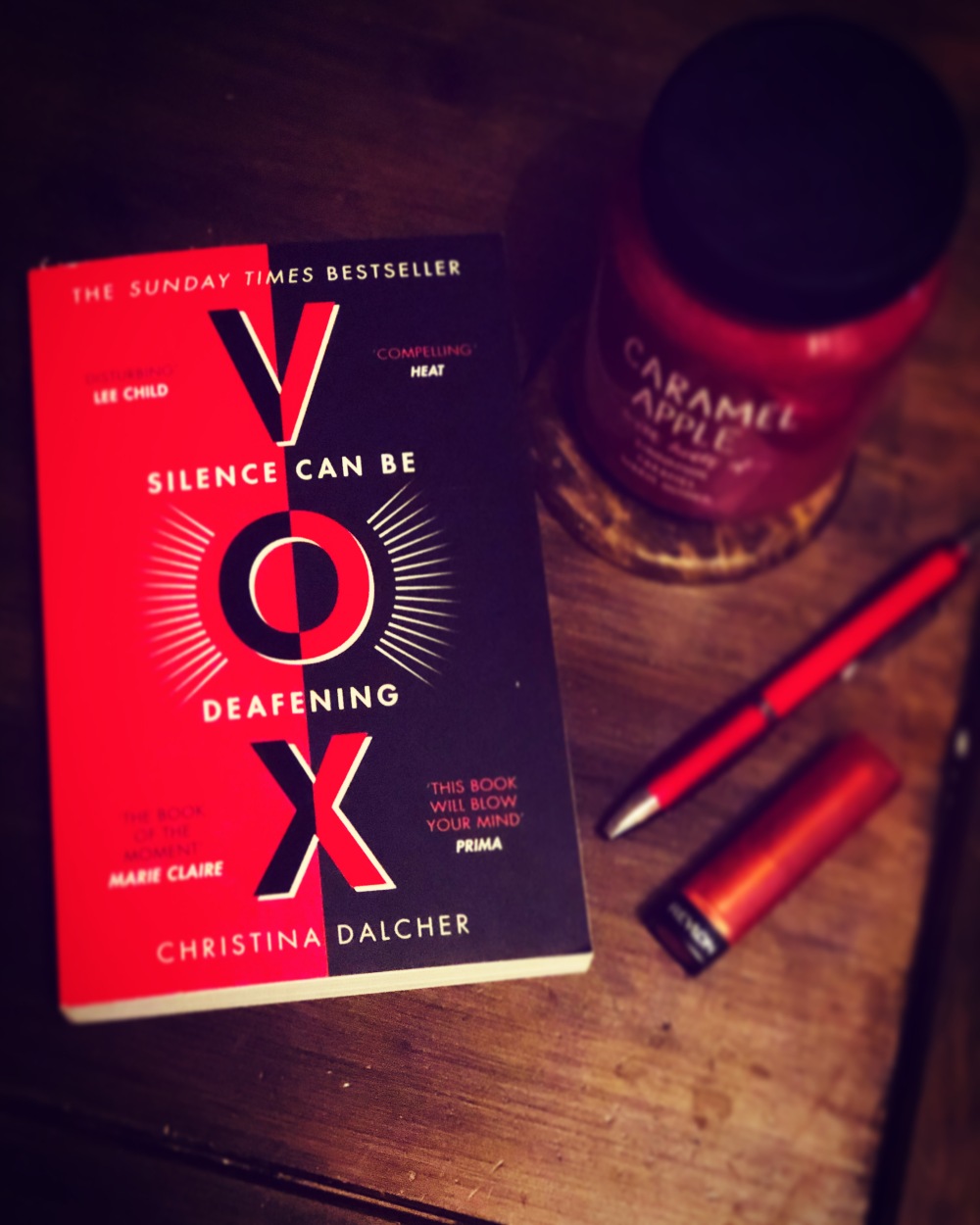 “Silence can be deafening.”

“WE WILL NOT BE SILENCED”

And those are just the words on the cover. With quotes from many magazines and papers promising a ‘terrifying’ and ‘gripping’ read, I was excited.

Dalcher’s debut novel is set in dystopian, modern day America where a deeply backward and extremely conservative Christian ‘Pure Movement’ has taken power and women everywhere have been silenced. Limited to just 100 words a day, women and little girls across the nation are reduced to short answers or saying nothing at all, for if they dare to go over their word limit by just 1 word, they will receive an electric shock from an electronic wrist bracelet. The more words they use over their limit, the stronger the shocks.

Traditional family life is all that is accepted in this new world, it is the only one ruled ‘pure’. Women must marry men only and men marry women only – homosexuality is outlawed. For those who refuse to marry in the ‘traditional’ fashion, they will either face a work camp as prisoners, or females will be made to work in brothels. Women cannot work in married households and Men must be the main breadwinners; women are sent back to the kitchen. All financial control goes across to husbands, passports are removed from all female citizens to stop them fleeing to other countries – and all women lose their jobs.

Our main protagonist is Dr Jean McClellan, the country’s leading scientist investigating the Wernicke’s area of the brain – or at least she was before the Pure Movement came into power. She is a married mother of 3 children; 2 boys, 1 girl. It is the girl, Sonia that she is most fearful for; concerned that her child will grow up with little vocabulary or ability to express herself using words. To little Sonia, this is normal. But for Jean, this is far from it and she longs for revolt. Her friend Jackie (a published author of controversial titles such as ‘They will shut us up’) warned her some years ago to not be so passive to the warning signs, trying to encourage her friend to not live in a ‘bubble’, but Jean never thought that this could possibly happen. But it did.

The rest of the story (I am not here to spoil it for you), is how Dr Jean can use her reputation in an attempt to do her utmost to work against the government, to come out of the silenced state and back to normality. It’s a story of empowerment and hope.

I think what frightened me and kept me so interested in the story the most is just how easily this could actually happen in some areas of the world. It seems like a far cry from reality, but just think about it for a second. Women do not have true equality around the world, not yet – and there are deeply conservative religions that do devalue women. Stranger things have happened in history.

However what was not fully explained is the reason for the counters in the first place, or the limit of just 100 words a day. It’s clear that these are control techniques to stop riots or protests – there are cameras watching the women’s movements everywhere – I think this idea could have been explored a little more before the story began- perhaps women could have tried and lost.

I thought the characters of Dr Jean and her husband Patrick were very interesting, I found their relationship however difficult to read. Patrick clearly loves and respects Jean, but the feeling is not mutual; she does not trust or love him – and it’s clear from details later in the story that this isn’t a change as a result of a silencing of half of the population by Men. I never quite understood what happened (besides what will become obvious).

I also found the character of Steven frustrating but understandable for an impressionable boy. He’s quite like an older JoJo Rabbit – very taken up in the excitement of the Pure Movement and the power it brings – until it hits him where it hurts.

Personally I did find the Villains in the story a bit too theatrical and stereotypical, but I imagined Reverend Carl and President Myers to be very much like the members of the Kansas Westboro Baptist Church, with Reverend Carl taking the form of Pastor Fred Phelps in my mind (if you’re not quite sure of whom I’m referring to, google ‘America’s most hated family’, or watch the Louis Theroux documentaries).

The character of Morgan was a little too shallow for my liking, but I quite enjoyed the character of Lorenzo and the mailman who I felt had quite a good level of depth. I enjoyed their rebellious nature and their support of Women to the point of personal risk.

So whilst I wasn’t totally bought into our network of characters, I did love the themes of the story. Part thriller, part love story, part total dystopian novel set in a crazy deeply religious controlling America. I was actually hooked, eager to find out if our characters managed to overthrow the Government and complete their collective missions.

I think this novel was one of the best I’ve read set in a dystopian setting. It wasn’t zombies or an international war, but a civil one that the country had brought upon itself. Not only had men turned against women, but women had turned against themselves; supportive of this lunacy. What I wanted to know more from the novel (part of the reason for the -0.5) is why some women support the movement. You could believe that ‘traditional’ families is ‘right’ in the eyes of god, and still not believe that you should silenced. Theres a lady across the street who proudly wears her Pure badge, but why?? What is she gaining? These are the questions that I felt left unanswered.

Also, I thought the excitement around Lorenzo was a little bit of an easy cop-out to raise the ‘excitement/danger’ level of the story, and I think that another Scientist working on the Wernicke solution in the lab who was a support of the Pure movement would have been another way of doing this, which Dalcher chose not to explore.

All that being said – this is a Debut Novel that has hit the ground running. Christina Dalcher, hats off to you! I look forward to reading Q when it is released later this month!

A recommended novel for dystopian lovers, red book cover fanatics, and by most accounts, a marmite choice for those who enjoyed The Handmaid’s tale or The Stepford Wives.

Finally – my favourite quote throughout the entire novel which I actually sent to a few of my friends was:

Think about what you need to do to stay free.

Well, doing more than fuck all might have been a good place to start.

I think we can all apply that to some element of our lives as they are right now. 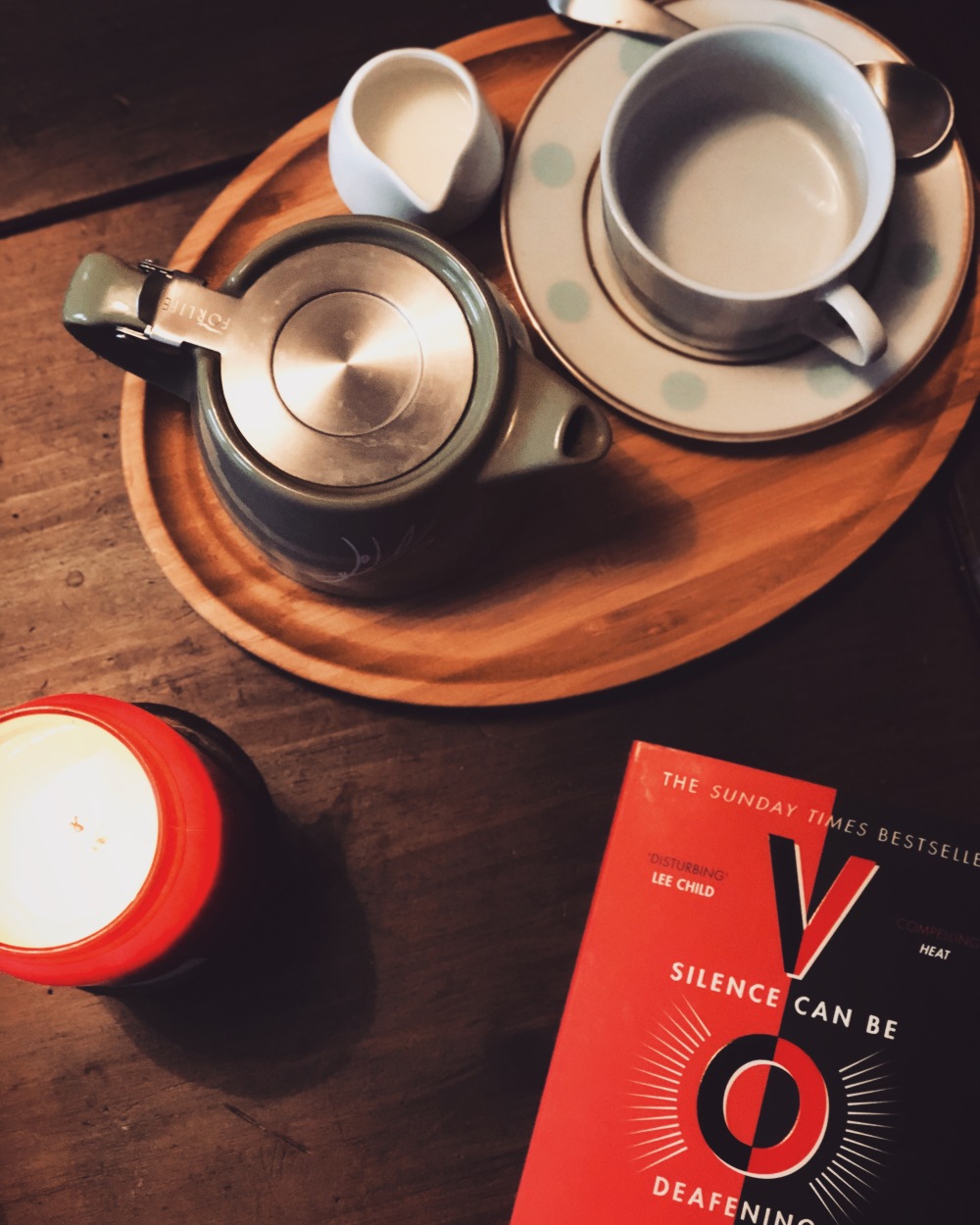 I washed this one down with Twining’s Breakfast Tea, whilst relaxing alongside my favourite ‘Caramel Apple’ candle. It’s a full bodied flavour, perfect for any time of day (not just breakfast!), perfect for lovers of a ‘builders brew’, and one that works well with our hard water here in Hull. It’s a popular choice in Hotels, Restaurants and cafes across the country. Oh how I cannot wait to get back to them!!

Also available on Amazon and most UK supermarkets.

So, dear reader, a question for you!

Are you a fan of Dystopian Novels? Why/Why not, and if yes, what is your favourite novel so far?

Until the next Chapter (and stay safe)