It’s officially my birthday weekend! It’s not particularly how I ever expected a 30th Birthday to go down (I mean I expected it would contain a whole lot of brunch and champagne) but honestly I’m still so excited for tomorrow! The idea of turning 30 is daunting.. lockdown is showing me I have more than the 1 grey hair I knew about, and my other half keeps reminding me that we will be a ‘couple in our thirties’ within the next 24 hours…Joy.

However I have some of the best family, friends and partner, my mums already had a box of Betty’s Tearoom treats delivered to me (she’s a bloody gem that woman) and I’ve got some awesome food plans tomorrow, consisting of a homemade Sausage and Egg McMuffin with hash browns (my OH used to manage a McDonalds a long while ago so im hoping it’ll be pretty good!), a delivery of local vegan donuts the size of my head <3! and finally, we’re making our own homemade battered fish chips and mushy peas for tea.

Honestly since the lockdown we’ve turned into mini Gordon Ramsey’s, cooking as much as we can and thinking of new creative dishes and ways to mix things up that we haven’t done before. I’ve been tipping a lot of unusual spices into things to see if I can change flavours of our usual dishes to mix things up a bit and so far so good. I highly recommend swapping your rice in your chicken tikka masala for roasted sweet potato seasoned with cinnamon, salt, pepper and paprika btw…!

One book that seems very appropriate to review right now is The Flatshare, as I expect many people will have moved in with friends or family for lockdown that they wouldn’t usually live with, and so can relate to some of the initial thoughts of the characters within this book. Enjoy!

THE FLATSHARE, BY BETH O’LEARY 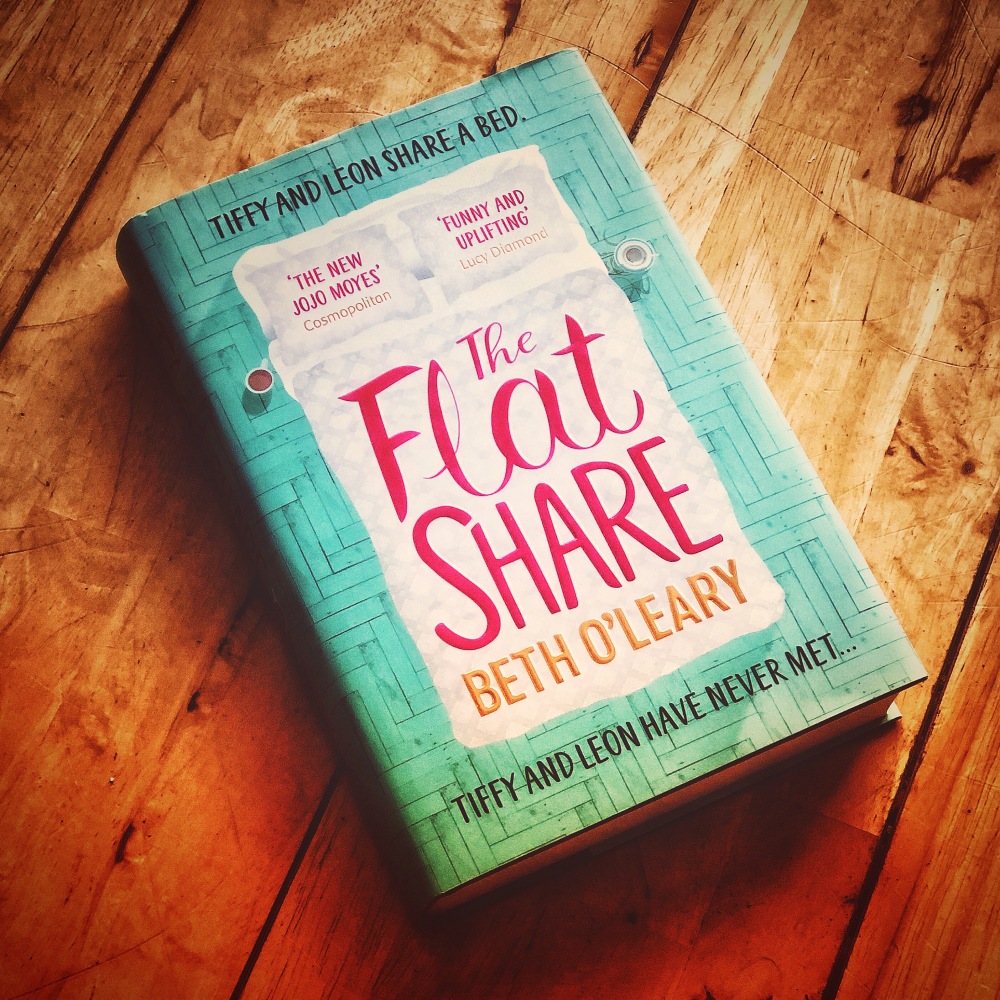 *This review includes some spoilers*

The story takes place in London, where Essex girl Tiffy is a recently single (and rather heartbroken) woman trying to find a place to live, after having to finally leave the home she shared with her now ex, as he has moved on quickly (too quickly..) and is bringing his new girlfriend to their home.. awkward.

Determined not to have to move in with her friends Mo and Gerty, she decides to find her own place to live, however working at a poorly paid crafting publisher doesn’t allow for her to do so in London alone.

Leon, a night-shift palliative nurse is keen for extra cash and is looking for a roommate so puts an ad out for a flatmate. Just one problem..there’s only one bed.

Tiffy’s friends thinks she’s absolutely bonkers, Leon’s girlfriend has a major issue with the idea of Leon sharing a flat..and his bed.. with a female flatmate, until she sees Tiffy for herself and decides she has nothing to worry about. Cheek!

Not that there should be anyway as the rules and agreement is that they never meet. Tiffy has the flat overnight whilst Leon is at work and Leon has the flat during the day whilst Tiffy is at work. The two shall never meet. Simple, right?

That is of course until super friendly Tiffy starts leaving post it notes and food for Leon to come home to.

‘Help yourself! Hope you had a good night. Tiffy xx’

And from there the conversations begin.. post it note by post it note the two begin to know each other via food and coffee cups left on the draining board. Tiffy is open and honest, telling Leon through these notes about her gaslighting shit of an ex Justin and Leon begins to.. very slowly .. open up to Tiffy. And oops! It doesn’t quite go to plan.

One thing I really enjoyed about the beginning of the book is the characters we are introduced to that are very well defined in their mannerisms and speech. Gerty, Mo and Rachel were probably my favourites as I can honestly say that my own personality is a bit of all 3. Gerty is cynical, blunt, straight talking and takes no shit. Work colleague Rachel is crude, smutty, funny and finds the dirt in everything! I really enjoyed her character, I felt she was needed to pick up the tone in some places and provide an alternative view on things. Mo is a therapist, calm, helpful and really willing to take the time to listen to his friends and offer gentle solutions, which is how I try to be for my friends when they need me!

The chapters are broken into Leon and Tiffy as perspectives, and what I liked is that if I left the book mid-chapter, I didn’t have to flick back to see who was talking, it was always  obvious. Leon’s speech at the beginning of the book is very staccato, short sentences, not much to say. Tiffy’s speech is colourful, descriptive, exciting. Their characters leapt off the page.

The tale (if you hadn’t gathered by now) is a love story of how two post it note crossed lovers meet via a flat share, but there’s so much more to it than that.

Leon has a brother, Richie (who reminded me a lot of Rachel in some ways, is it just a coincidence that both names begin with R or was this intended?) – Richie is imprisoned, wrongly the family believe, for a crime he did not commit. Leon as previously mentioned is a palliative nurse, and his place of work has some wonderful characters, Holly the cheeky yet very clever 8 year old, and Mr Prior the elderly gentleman who knits wonderful scarves.

Tiffy is dealing with the troubles of her stalking gas lighting ex. Clearly still recovering from the emotional abuse, Tiffy has many moments of doubting herself and the story for her really is escaping the ex and finding ways back to being herself and finding her happiness.

She also has Gerty who is a lawyer, and via post it notes Gerty is lent out to Leon and Richie to see if she can help with his case, which brings the two flatmates closer together.

I liked the fact that many of the characters who seemingly had nothing to do with the other Flatmate, in the end in some way become entwined in the story with the other character, it was skillfully done and reminded me of the crochet in ‘Crochet your way’ written by Katherine.

The language and descriptions used by Beth in this book are what makes it such a joy to read. The initial descriptions of when the two move in together and Leon’s reaction to Tiffy’s clothes all over the place made me laugh out loud! The book is written with fantastic British humour, yes the ending for Tiffy and Leon is predictable (and in a way I think its supposed to be) and its a slow burning love story with the way the two come together is charming. But the book is written with depth and warmth and is about so much more than that. It deals with some really difficult subjects that I do think are handled pretty well. I was absolutely screaming (internally!) at Tiffy to get away from abusive Justin at any moment he coincidentally ‘popped up’ at important moments. I think any of us who’ve ‘been there’ must have felt the same, but much like when you’re in the situation yourself Tiffy is looking for what she wants to believe which is what Justin wants her to believe, rather than what’s obvious to all.

This was one of the best of my TBR bookshelf pile to have picked up during lockdown. Warm, witty and full of feel good moments, this book became a happy companion for a few days!

Considering that this is Beth’s debut novel, all I can say is WOW. I mean, this one hit the shelves running, it’s been an IG and Goodreads favourite for some time and I can understand why. I’m quite a fan of Lucy Diamond novels for a feel good family/friends/romance read, and I felt that readers of these books would also enjoy The Flatshare. The British humour, the hilarious fierce and frank characters, the difficult more deeper content it handles.. the book is bold, its colourful and it made me happy. Yes it had moments where you’re like ‘well that wouldn’t happen’ but that’s the fun of a rom-com novel is it not?

I just had one slight criticism to make in that I personally wanted a bit more discomfort between the two initially. Maybe Tiffy could have left some really dirty dishes around the place and Leon could have really got annoyed with her.. maybe Leon could have thrown away a chipped old favourite mug of Tiffy’s because he thought it was broken… I say this because I am quite an ‘organised mess’ person who believes chores are only necessary when the place looks like it needs it and my other half is an absolute cleaning machine who would clean all day everyday if he could. I know he takes a lot of deep breaths and practices a lot of patience when I say things like ‘but fairy doesn’t need rinsing off plates’ and ‘I bought new books..no I don’t know where I’ll put them’, so I can imagine that sensible clutter free Leon may have been the same.

I also felt that sharing a bed with someone, you tend to pick up on their scent. Maybe an aftershave, a perfume, shampoo. I found it peculiar that this was missed, particularly when the two began having feelings for one another.

However on the whole, a fantastic read. I’m really pleased to say that this one is still in the Top 10 charts, and Beth O’Leary’s second novel ‘The Switch’ has just been published in the last fortnight, which I’m looking forward to reading soon!

You can try your local independent if they have a contact free delivery service during lockdown, or please support your high street.

Cheapest I could find for you was just £0.82!!! Click Here . You can also gift this ebook to a friend which is lovely.

Heath and Heather Organic Yerba Mate and Nettle, £2.59 for 20 bags

I love this Yerba Mate. If you haven’t tried it before it’s a herbal caffeine product, quite like a green tea but with some more antioxidant benefits, vitamins and gives you the same kick as a coffee but it is a great alternative if you’re trying to cut down.

Well readers, the next time I speak to you I’ll officially have to click the ’30-45′ age group drop down box. But… I’m hoping to have a brand new stack of books to play with tomorrow morning, so I’ll keep you posted!

I’ve still got an archive of 2 books to share my review with you on (honestly I’ve not read this many books since I did a 6 weeks summer holiday library reading challenge as a 7 year old!) which I’m looking forward to! The next one will be Bruised Pork by An Yu.. so keep your eyes peeled for that one!

Until the next chapter,